Yesterday morning I was trawling my Twitter feed when I came across one of those light blue touch-paper moments, it’s one of the reasons I enjoy social media so much; it’s always a great catalyst for my inherent cynicism…

Amongst all the news, comment and other miscellaneous dross, I noticed one of those many snippets about Life Coaching. You know the ones… “5 reasons why you need coaching to a better life” or “Your Top10 advantages of coaching you to the top” et al. The particular Tweet I’m referring to (see below) was from the now famous, or infamous Louise Mensch, depending upon your personal viewpoint.

Ms Mensch was previously involved in British politics, is a past Conservative parliamentary member for Corby, was a prolific columnist for British newspapers and is now a reasonably succesful author living in the USA.

Ms. Mensch has been described as “something of a lightning rod for controversy” by the media, amongst other things. She now lives in New York “under the radar” and recently spoke in The Telegraph about her latest book and the comparisons between living in the UK and USA. The topics included those of beauty, ambition, power and ‘playground’ politics.

I suspect America is probably a great place to reside for the likes of Ms Mensch, it abounds with many of the inherent traits and ethics she undoubtably possesses.

That is the true genius of America, a faith in the simple dreams of its people, the insistence on small miracles. That we can say what we think, write what we think, without hearing a sudden knock on the door…(Barack Obama 2004)

Perhaps, as the author Günter Grass once wrote in his novel The Tin Drum and Ms Mensch may well find out; “America is the land where people find whatever they have lost.” Now back to the Tweet…

“Do you need a Life Coach?” Asked Ms Mensch and then went on to point out, by following a website link, why Americans (and she) love them. But why has the subject of Life Coaching become so very popular in recent years?

I have to admit to being a cynic on the subject and, as I’ve said before – “I’ve got a life… Who needs a bloody ‘Life’ Coach’?

Firstly because I’ve never been the sort of person with any massive ambition, I’ve mostly been contented with my life. I’ve always been the kind of person who is generally happy with my lot, whatever that lot may be.

I’m not the sort who harboured any burning desire to reach the top rung in the hierarchy of any task that I’ve been employed to perform. Rather, to do what is required of me and to the best of my ability. When that advancement (often necessarily) involved climbing up the ladder of achievement on the backs of others, I found that desire even more distasteful.

A happy and contended life for me doesn’t always have to include, or be the result of power and/or monetary wealth. I do however appreciate that living actually involves a financial cost and the more cash you have the more you can buy but to my mind, the best things in life usually cost very little.

Ordinary riches can be stolen, real riches cannot. In your soul are infinitely precious things that cannot be taken from you…(Oscar Wilde)

Secondly my cynicism revolves around some of those people who actively promote Life Coaching. How much of it is a genuine desire to help others? Or, as I often suspect, yet another ‘money spinning’ opportunity developed to get paid for examining other people’s personal inadequacies, be they real or perceived?

As one digs deeper into the national character of the Americans, one sees that they have sought the value of everything in this world only in the answer to this single question: how much money will it bring in? (Alexis de Tocqueville)

Lastly, I have some concerns about the age/experience of some of those who provide Life Coaching services to others (Ms Mensch excepted). It seems that many believe a college degree and a few certificates equates to actual experience of life – “surely it must do, it says so on the Diploma?” This is the one which triggered my reply (above); “Amazing how so many ‘Life Coaches’ actually appear to have very limited life experience! #JustSaying”. She was prompt with her reply.

“True of some but not of all. Also is a distinct skill. Most top book editors have never been writers.” Obviously, when you look at the life of Ms Mensch (via Google), it is quickly apparent she’s fitted a great deal into her 20+ years of adult life (some good and some not so good). She has to be commended for that alone, even if she (and the ‘establishment’ and/or media) weren’t too happy about some of it from time to time. So what really is Life Coaching and more importantly, who needs it?

Life coaching draws upon a variety of tools and techniques from other disciplines such as sociology, psychology, positive adult development and career counseling with an aim towards helping people identify and achieve personal goals…(wikipedia.org)

It doesn’t surprise me that Life Coaching had its beginings in the USA. According to the wikipedia.org “Contemporary life coaching can be traced to the teachings of Benjamin Karter” an American football-coach who turned to ‘motivational’ speaking during the late 1970s and early 1980s.

One of the most accurate and succinct descriptions of Americans that I’ve ever read, covering most aspects of the ‘breed’ is…

All colors and blends of Americans have somewhat the same tendencies. It’s a breed — selected out by accident. And so we’re overbrave and overfearful — we’re kind and cruel as children. We’re overfriendly and at the same time frightened of strangers. We boast and are impressed. We’re oversentimental and realistic. We are mundane and materialistic — and do you know of any other nation that acts for ideals? We eat too much. We have no taste, no sense of proportion. We throw our energy about like waste. In the old lands they say of us that we go from barbarism to decadence without an intervening culture…(JOHN STEINBECK, East of Eden)

It’s no real wonder that they (and people like them Ms Mensch) have a craving for and love of life coaching. It’s probably also a good reason why so many of them (and even their bloody pets) have therapists!

I find the whole Life Coaching topic somewhat ironic. So many people (often Americans) vociferously bemoan the fact that someone else (i.e. government or peer pressure) is telling them how to live their life.  They complain about media influences on their life; they have ‘grave concerns’ about aggressive advertising tactics from the fashion industry, suggesting what they should/should not look like. And then… they’re prepared to rush off and spend $$$ (£££) on freaking Life Coaching…How bizarre!

Theodore Roosevelt once said; “…The things that will destroy America are prosperity-at-any-price” and “the love of soft living and the get-rich-quick theory of life.” In my opinion it’s that type of ethic which actually drives these excessive desires for power and wealth. Life Coaching could reasonably be seen as nurturing and providing a conduit for the flow of those desires. Again from Theodore Roosevelt – “To educate a man in mind and not in morals is to educate a menace to society” – something which has actually come to fruition in much of today’s leadership perhaps? 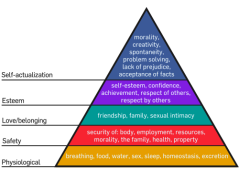 Abraham Maslow explained that “we may define therapy as a search for value” and I suppose that coaching for life is probably no different. But how much of our burning desire to achieve is a natural occurring and inherent desire?

One that could be based upon his Hierarchy of Needs, or could it be some consequence of a dysfunctional childhood attachment theory? Or, could it simply be down to pure greed?

If it’s as a result of the former, I can fully understand the foundations and initial levels of that desire however; why do so many also appear to lack the the nicer human qualities defined by ‘self-actualization’ once they reach the top of their chosen ladder?

Often the greatest barriers to our success is our own fear of failure. I think this is where the ‘life’ coaching aspect can probably be of value to many. That ‘fear’ is often unrealistic, the product of limited inherent self-confidence, or a damaged level of confidence (whatever the reason). Maslow also said “what is necessary to change a person is to change his awareness of himself” which is so true.

We all need some direction and a good level of self-belief if we are ever to succeed in anything we do however; “If you don’t know where you are going, any road will [still] get you there” (Lewis Carroll). If what he says is true, why do we really worry? 🙂

If you think that you really need a ‘Life Coach’ and it will do you some good, then go for it. Whatever floats your boat as they say!

The secret is always to remember that which Buecher said on your way to wherever you desire to be; people “may forget what you said [on the way there], but they will never forget how you made them feel [whilst you were en route].”