As academics warn us about “Britons in ‘Forced Penury’ due to Victorian welfare rules” (see here), Chanel 4 TV has caused a great deal of anger with its ‘fly-on-the-wall’ documentary Benefits Street. But how much of this is political sparing and how much is real empathy?

The producers of the documentary say the “series reveals the reality of life on benefits.” Critics on the other hand say it is “unrealistic and unrepresentative” of many of the issues involved. The show has also sparked hundreds of complaints to broadcasting watchdog Ofcom about the way it portrayed people on benefits.

Interest in the show is obviously there, judging by all the ‘noise’ being generated. The first episode drew in around 5m viewers and this figure apparently increased by a further million for week two. The Birmingham Mail also reported how – “Fans of the documentary series are posing for pictures next to the James Turner Street sign and uploading them to social media websites like Twitter” (see here). Popularity indeed but, many are incredulous about the show.

The outrage over Benefits Street has been quite extraordinary, comparable only with the furore over phone hacking…(spectator.co.uk)

Irrespective of the rights and wrongs of the show (and there are some), or who is actually correct, or even if you’re really that interested in the first place, Benefits Street has certainly got the newswires humming (see here).

Toxic Fame Living on Benefits Street: The problem here isn’t any kind of sinister right-wing agenda (as critics of Benefits Street allege). Rather, the media’s fluid reality has clashed against the more unyielding reality known to most people, with uncomfortable results…(read more)

Wheeled in once again as the ‘Great Defender of the ‘working’ classes Jones didn’t disappoint. He was his usual vociferous self as he berated those behind the production of Benefits Street. He called the show “a medieval stocks updated for a modern format” and continued his barrage by bemoaning the media’s  “relentless, almost obsessive hunting down of most extreme, dysfunctional unrepresentative people.”

After listening to Owen Jones I usually have to ask myself; is he really the ‘Baying Jakal’ of social conscience that he (and many others) set him up to be. Or simply, just another insidious little weasel with a subtle but personal agenda? One that is continually delivered in a stealthy manner and designed to enhance his own public profile and self-worth? You decide!

In light of all the angry debate, Channel 4 has now commissioned a live TV debate in response to the bitter backlash against Benefits Street (see here). I can’t help thinking all we’ll see is more critics shouting about how the show “exploited its participants” or suggesting it “painted an unfair picture” of our welfare state. But did it really?

The left should be angry at how we treat those at the bottom. Instead, they’re angry at people talking about it. (Fraser Nelson – The Spectator)

The live debate is set to be aired after the fifth and final episode of the programme on February 3rd.

But What is the Benefit of Benefits Street? If indeed there is one? It’s a question that was posed in a blog at the Huffington Post by Bansi Kara,  a 30-something teacher who became “tired of having opinions in her own living room.”

She goes on to say she has “questioned not only the motivations of Channel 4 in airing something that has solicited such negative attention,” but also her own motivation to watch it and her inability to turn it off. She further asks, like I’m sure others have also done – “What is it about the show that makes it compelling?” I have to say, I tend to agree with Kara’s overall opinions about the true value of the show.

For many, the recession is something other people have suffered. Financial hardship is at an arm’s length and we care about it in the same way we care about starving children in third world countries – with a condescending pity. (Bansi Kara)

Apart from any Jeremy Kylesque voyeurism aspect in viewing the show, she explains that “We watch because it is comforting. We are not like those people.” True for many of us but, as she also points out, it has a tendency to court the absolute worst elements in our society. I don’t think any right-minded person would find difficulty in agreeing with Jones or Kara et al, who have condemned those calling for “all benefits claimants to be shot.”

The vitriol on the hashtag that accompanies the show should be a stark warning to our government. What causes such anger against people less fortunate than others? (Bansi Kara)

In answer to Kara’s question; Have we always been a nation so lacking in empathy that we would suggest ‘bombing’ James Turner Street? I honestly don’t think so, we once had the ability to care about others in our society, no, we really did. However, the question “When did we become these people?” is a lot more difficult to answer.

Like much of the other stuff we now see and (hopefully) dislike in that society, the inherent self-importance and self-interest, developed from those born within and to the Baby Boomer Generation, could well be the major catalyst. Kara’s final paragraph also struck a chord of agreement with me.

It has managed to create a three way dynamic that forces us to question ourselves. It has asked us to watch ourselves watching the residents of Benefits Street. Now that I can see that, I’m not sure I like what I see. (Bansi Kara)

As Kara points out, many of the issues highlighted in the show, and possibly the way in which it’s presented, is probably way “too subtle for some” of those who have been watching it. Yet again I tend to agree! 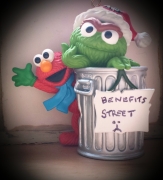 Finally and by way of a little light relief from what is a serious subject, and totally on topic, here is a comment which my wife found on Facebook – made me smile… 🙂

After all the hype I eventually watched Benefit Street – Amazing how similar it is to Sesame Street: Both have a big bird, a bloke living out of a bin and people trying to learn the alphabet…(Author Unknown)