Within many aspects of day-to-day life I often see common thought processes and analogies that are applicable to my area of work, addictions recovery support. The current snow issues are one such event…

It’s as if the UK population is ‘addicted’ to the weather. At almost every opportunity we tend to frame our conversations and small talk around it… “turned out nice again” or, “bloody nippy for the time of year” etc.

But, despite our expertise at dealing with weather from a verbal or philosophical perspective, we’re actually pretty crap at dealing with it from physical one. Any decisions and plans around sound risk-management of the negative impacts of weather are often found to be lacking, both from a personal perspective and, to a lesser extent, from organisational perspectives. Especially when that weather happens to be a little more severe than normal.

Each time the forecasters predict some snow our country goes into anxiety melt-down… anybody would think that we’re suddenly standing on a precipice at the edge of the world.

But worse, when we actually do get some snow, no matter how little that may be, our transport systems faces Armageddon and motorists slide off roads on mass. We’re getting to a point where we allow the media to dictate and control our emotions and thoughts… mostly irrationally!

This continual exposure to overt doom, gloom and fear, constantly peddled by the media, builds and perpetuates the mountains of anxiety and depression in our society. And all this on top of Brexit and Austerity fall-out, is it any wonder our heads hurt?

Back in 2017, Duncan Lindsay an editor for MetroUK and a Scott living and working in London wrote: “Batten down the hatches. Stock up at the supermarkets. Say emotional goodbyes to work colleagues who you may not see for some time. And panic a little bit. For a light flurry of snow may be heading to London and I have no doubt whatsoever that it will lead to chaos of apocalyptic proportions (read more).

Lindsay concluded his somewhat satirical article by saying; “Try living in the countryside or a small town up north where the snow doesn’t just lie but it drifts and where a school will only close in a blizzard, if the heating packs in.”

Fast forward back to 2019 and understandably, thanks in main to our emotive media, it would appear nothing has changed.

Drivers were stranded for 12 and a half hours, a bus carrying 30 school children was rescued and hundreds of cars were abandoned on Thursday night as heavy snow hit Cornwall. (Read more)

Motorists were stuck for 12hrs in 6inchs on the A30 and A39 near Bodmin where ‘unexpectedly’ there was apparently ‘carnage’ on the roads in Cornwall, according to the media.

Checking with contacts at ‘official’ sources; it would appear that weather warnings had actually been going out all day, Ad infinitum, on almost every media source available. But still they got stuck, for all manner of reasons and no doubt will offer all manner of excuses. At least 140 found succour at a local hostelry, staying at the famous Jamaica Inn for the night. But as Bristol Airport cancelled flights due to snow, the media were also praising the public who braved the snow to see Meghan and Harry… in Bristol.

Snow in the UK always seems to deliver an Apocalypse, or at least it does according to the media. Schools closed across Wales and England, a Mum in Cornwall giving birth after a three hour ambulance delay and more snow being forecast but honestly, what do you expect… it is winter after all.

Most of the days lunchtime radio phone-ins were full of the expected; “this is outrageous” or “how am I supposed to get to work?” And, “why aren’t the emergency services doing more?” Or, “why haven’t the gritters cleared my cul-de-sac, I need to get my car out?” Thankfully, I did hear one caller with a sensible viewpoint…”I listened to the warnings but didn’t think it would be too bad and then got stuck. It’s my fault.” Yes, correct; your decision, your actions (despite warnings), your negative outcomes… accept it, deal with them and move on.

As the Stoic Ancient Greek Philosopher Epictetus said more than 2,000 years ago; “It isn’t the events themselves that disturb people, but only their judgements about them” or, to put that even more simply… it’s not what happened that made us upset / angry / sad / disappointed / scared / worried / happy, it’s how we think that makes us feel the way we do.

In winter, there is a likelihood that you might get some snow so deal with that risk. In the words of the old Greek chap again… “make the best of what is in our power, and take the rest as it occurs” – you cant change nature but you can guard against the risks. There’s plenty of advice out there and it’s widely available… if/when you choose to look.

As we’ve already seen, snow, strong winds, snow drifts and freezing rain play havoc with the UK’s road network, but wait for it… that occurs particularly in January and February – shock, horror!

Since 00:01 on 31 January until 10:00 this morning our salt spreaders have undertaken at least 1,300 journeys on England’s motorways and major A roads, covering around 80,000 miles!
If you see one out and about during the cold weather, give them plenty of room. #WeatherReady pic.twitter.com/uBkChdW9x0

The Met Office issue regular forecasts and accurate warnings, as does the BBC Weather Centre. As can be seen from the above, the Highways Agency work on keeping primary routes clear but deep snow can appear suddenly and ‘unsuspecting’ and/or ‘inexperienced’ drivers are likely to get caught out and stuck in their stranded vehicles. You can get some severe weather driving tips from the Met Office or, check out the Winter Car Kit 10 Essential Items, listed at @UKSnowUpdates.

Snow Joke: 10 Safety Tips: It’s important drivers who do venture out onto the roads are fully prepared for the worst-case scenario. Knowing how to act safely in such situations is key to ensuring the severe winter snap doesn’t end in disaster. Follow these steps to stay safe during what the tabloids have taken to calling “snowpocalypses” (www.driving.co.uk)

But once you’re armed with all the information and winter kit resources, then what? Well here’s the rub, people still can’t make decisions for themselves,  and if they do and something goes wrong, it’s automatically every bugger else that is at fault… but certainly not them!

Incidentally, did I say there are some nice pretty images of snowy scenes across the UK now available on ‘tinternet? 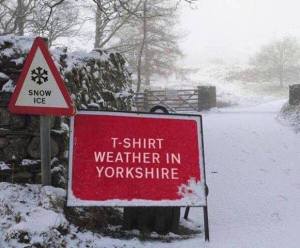 But flippancy aside, most of our angst about the snow comes from our worries about changes to our normality, whatever that ‘normal’ may be.

Again, it’s what we think as opposed to the event itself that causes the issues. Irrespective of whether or not we’re delayed or we do in fact get stuck, it’s our thoughts about that event(s), or the possible event aftermath, rather than the incident itself, causing our anguish.

We let ourselves get over-concerned about uncertainty, about possible dangers, we dislike the inconvenience of changes to plans and possibly most significant for many, we worry about the money impacts – Is my boss expecting me at work and if so, will I get paid if I can’t get there?

That said, there are also those who will constantly look for any and every opportunity not to turn in for work; what better than a smattering of snow, especially when you’re malingering is backed-up by a media “don’t travel unless necessary” message. That’s a major reason behind the work attendance / non-attendance due to weather pay debacle (above) however… if the cap fits etc.

I’m not suggesting that problems will simply disappear just because we think about them in a different way, that’s way too simplistic. What I am saying is, we should use all the available ‘facts’ and sources of sound information (rarely the emotive press) to inform your decision-making process, that leads to our plan of action.

Make preparations and contingency plans to mitigate against the worst case scenario. Ask yourself, do you fully understand all the possible negative impacts of your decisions and actions?  Are you able to cope if things don’t go according to your plan? Assuming you stick to your original decisions, what are the impacts for others and yourself (in that order)? If something happens that is beyond your control, how will that impact on your decisions and plans? How happy are you about the plan you have made?

Finally, if you have made the wrong decision(s), or something goes wrong with your plan, irrespective of what or why, don’t get angry or try to blame someone else. What is the point of that? What does it actually achieve? Nothing, anger is a negative emotion which causes you more harm than good. Use the time and the circumstances as a valuable learning opportunity for future decision-making and remember, sometimes shit happens, deal with it, get over it and move on… A mighty useful ethos in addictions recovery!

National Coordinator for UK SMART Recovery - Previously a Recovery Worker and prior to that a Management Consultant and H&S Practitioner - Kept sane by Angling, Good Food, and the love of a good wife - Cynical thoughts sometimes developed from others. View all posts by Dave Hasney