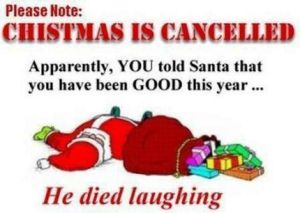 As Christmas draws ever closer, surprisingly people still continue to be surprised by my “Bah Humbug” ambivalence towards all the seasonal activities.

It may be the ‘season to be jolly’ but I don’t need anything (or anyone) to tell me when to be happy. It may be that time of ‘goodwill to all men’ but… shouldn’t we actually be like that throughout the year, every year?

Regular visitors will note that I tend to write a similar themed post to this every year. It’s not that I’m a miserable git, far from it. Neither do I take some great pleasure from raining on everyone’s festive parade, each to their own enjoyment. My seasonal angst is mostly directed towards all the high levels of hypocrisy displayed at this time of year. Falseness that is mostly presented in an attempt to enhance one’s own self-worth in the humanity stakes.

The traditionally understood Christmas values actually disappeared decades ago. It’s now little more than a period of self-indulgence, an opportunity to show off and/or score points against family and friends. Overt commercialism and grotesque levels of excess (and waste) are, unfortunately abundant.

Like many, I suppose I lost that feeling of ‘Christmas magic’ as I departed childhood. That said and as I’ve grown older, this time of year has almost always been a massive reality check for me. I don’t see any change to that any time soon.

Countries are still waging war against each other, we have global warming and there is still famine. We still have poor people and too many people are homeless, even in the so-called Western Civilised World. Sadly people still die from preventable illnesses, let alone the untreatable terminal ones, or they simply succumb to old age. People still beat hell out of their partners and/or children. People still get drunk, drive their cars have accidents and seriously injure or kill people. Just like any other time of the year, the ‘Grim Reaper’ doesn’t stop work just because someone told him it was time to be happy and party.

Irrespective of all the realities that life can throw at us; how many of us, hand on heart, can say that we’ve actually been good people all year? Who can say they’ve been a source of constant value and example to their families, never mind their neighbours and our society?

If you’ve never contributed, in any way shape or form, to all the ills of the world and the many problems facing our society, and you can answer an honest “yes” to the two questions above then have a very Merry Happy Christmas.

Failing that… Christmas is Cancelled and Bah Humbug!

One thought on “Time To Cancel Christmas?”