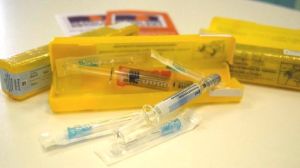 It’s about two years since UK laws changed, allowing the legal use of the heroin antidote Naloxone. A life-saving drug that can be administered be anyone who encounters someone dying of an opiate overdose.

So why is this mostly unknown substance (to those outside the addictions arena) still not available at the levels it could be?

Public Health England say; Naloxone is the emergency antidote for overdoses caused by heroin and other opiates/opioids (such as methadone, morphine and fentanyl). The main life-threatening effect of heroin and other opiates is to slow down and stop breathing. Naloxone blocks this effect and reverses the breathing difficulties. Naloxone is a prescription-only medicine and cannot therefore be sold over the counter. It can however be supplied without prescription by drug services. It can be used by anyone to save a life in an emergency.

In the UK, we’ve seen sharp increases in drug misuse deaths since 2012. Deaths in England and Wales in 2016 totalled 2,593, a 3.6% increase following a rise of 8.5% last year, 17% the year before and 21% the year before that. Deaths due to heroin and/or morphine account for a third (32%) of all deaths related to drug poisoning. (Public Health Matters)

So why is a simple solution to a worrying problem still misunderstood and importantly, far too slow in becoming available (at least in some areas)?

It’s a simple fact; most of our public perceptions about illicit drugs, their use and the people who use them are formed by stereotype. Born from the failed doctrine and actions developed under the so-called War on Drugs. There is a large proportion of our society that can’t or won’t see illicit drug use (or Substance use Disorder) as a public health issue. Many prefer to stick with the punitive criminalisation methods employed to deal with subject and associated issues.

The harms caused by the war on drugs can no longer be ignored. It’s time to leave behind harmful politics, ideology and prejudice. (Support Don’t Punish)

Thankfully things are changing for the better, finally. Doctors say the War on Drugs has failed and media reports (interestingly under crime not health sections) are saying, the British Medical Journal calls for legalisation of drugs. But as the chairman of the Night Time Industries Association pointed out (with vested interest some would conclude); “People will always take drugs, regardless of personal risk and the legality of it.” He was right with his observations though; our laws should be amended to reflect that and yes “some grown-up conversation around those facts” are long overdue (see here).

Evidence and ethics should inform policies that promote health and respect dignity…prohibition laws, colloquially known as the “war on drugs,” must be judged on outcomes. And too often the war on drugs plays out as a war on the millions of people who use drugs, and disproportionately on people who are poor or from ethnic minorities and on women… (British Medical Journal)

But even now, when public thoughts and the ‘official’ understanding of policy makers and governments starts to change (in the right direction), the changes towards a ‘public health’ process are stymied.

In addition, the Naloxone issue is also being held to ransom by the pharmaceutical industry for commercial reasons (see below) or perhaps even synyster ones, if you follow Big Pharma conspiracy theorist thinking? With shrinking budgets in austere times how can treatment services purvey expensive commodities with reduced funding?

How price-gouging of opioid overdose cure costs lives: ‘There’s never enough’ – Pharmaceutical companies have been accused of profiteering off naloxone, increasingly used to pull drug users back from death amid staggering epidemic… (The Guardian)

BBC Newsnight: “Heroin deaths have doubled in three years in England and Wales. So should naloxone – the drug that reverse overdoses and saves lives – be more readily available?” Katie Razzall reports from Liverpool. NB: Warning this YouTube video report contains scenes of drug taking from the start.

A survey conducted by the LGA and PHE in June to July 2017 (see here) examined how naloxone is considered by local authorities as part of their response to drug-related deaths. The results were I have to say more refreshing than expected.

It appears that 90% of respondent local authorities currently made ‘take-home’ naloxone available (99% via drug treatment services, 25% through hostels and 25% utilising outreach workers). 76% of respondents who made it available had a policy or framework for its provision.

Like so much else today, our public services delivering support for our health & wellbeing are governed (more than ever before) by ‘risk management’ and book balancing. Yes you are a human being but sadly and too often, you’re seen as little more than an often manipulated statistic within an agency’s departmental spreadsheet.

The 2017 Drug Strategy recently set out how the UK government and its partners, would take “new action” to tackle drug misuse and the harms it causes. Commendable but still with several missed opportunities. Many ‘experts’ in the field of addictions recovery treatment and support will tell you; the strategy still missed much of that required ‘Grown-Up (forward) Thinking’ talk!