Always nice to see a balanced weather prediction, as opposed to the ‘shock horror’ tactics of the emotive tabloid press…

A Tropical Storm called Bertha, which is currently in situated off the east coast of the US, could head towards Europe over the next week – so what’s the outlook?

Forecast tracks for Bertha, which was a hurricane but has now been downgraded to a tropical storm, suggest it will head north – staying offshore from the eastern coast of the US before turning to track east across the Atlantic. 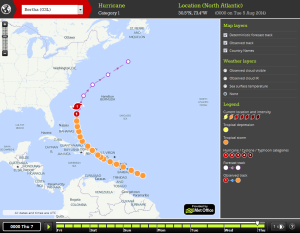 Forecast track for Bertha from StormTracker shows it heading north off the east coast of the US before turning east.

While all forecast models suggest the storm will head in the general direction of UK and continental Europe, there remains a lot of uncertainty about exactly what it will do.

One certainty is that as the storm heads north away from the very warm seas which drive its power, it will lose strength and become what’s known as an…