A friend pointed me in the direction of an interesting and mostly humourous website recently. Perhaps it proves the ‘evidence’ which supports many of the claims; we’re all served by Bodgit & Scarper Police PLC these days?

Although my friend made no comment at the time of posting the link, I’ll probably get one here in due course – the reason why he shared the link in the first place perhaps?

The first irony of my perception of this website is; it goes someway towards supporting a personal belief that – it’s not always a good idea to accept the advice of the private sector. Especially when it comes to the ‘best’ way to run police ‘business’ – even more so when you chose to follow the advice of the wrong company (e.g. G4S et al).

The website concerned here is crimebodge.com, one that came about as a direct result of one person’s unfortunate and unacceptable experiences with Derbyshire police. When an ex-employee allegedly stole £10,000 from this person’s company, cheated customers, forged cheques and bankrupted the business, he contacted Derbyshire Police to report it. They told him that it was “a ‘civil offence’ and there was nothing they could do” – Wrong!

Thankfully for the complainant, the issue was eventually resolved in the civil courts and the plaintiff received compensation however, at what damage to public perceptions of the police?

The website has snowballed from one person’s angst about a single experience, to a site which now caters for wholesale ridicule of a whole profession. I can (mostly) agree with many of the postings on the site (see example below) however; it also worries me that any attempt to systematically undermine the framework of our legal system, also presents some hopefully unintended, but extremely worrying unseen consequences for our society.

Your rights to record the police (without their say so): If you are ever stopped or spoken to by the police; if they pay a visit to your home, detain you on the street or interact with you in any way, it is YOUR RIGHT to video record them for your own protection…(crimebodge.com)

The website author says “I know I am not alone in wanting to ridicule our backward, ignorant, politically motivated, self-serving sorry excuse for law enforcers we have currently wrecking the front end of the justice system in this country.” I have to agree with an assumption that is probably correct, perhaps more so now than ever before.

One of the things that always concerns me with such a broad-brush approach to an issue, especially with the ease at which it can be circulated via social media today is; when the shit hits the fan – many who don’t actually deserve to be tainted also get a liberal smattering and – shit sticks!

It’s also sad that the author(s) became obliged to switch off the comment posting capabilities in the website, mostly due to rancid and caustic comments from (alleged) members of the policing family. Some more own goals, probably from the type of individuals the website is aimed at? But all cops aren’t bad…Are they?

They’re not all bad…Completely true and we pity the minority of cops that have to suffer the majority of dull-witted, petty minded, court shepherds. But we’re not after the good cops, and as the old police maxim goes, “If you’ve done nothing wrong, then you’ve got nothing to worry about.” Which applies to cops as much as it does to the law-abiding public…(crimebodge.com)

Browsing through the website, it’s interesting to see how many examples of all the police alleged wrong-doings and perceived incompetence appear to have originated in the more metropolitan type police force areas.

Does this reflect the (undoubted) differences between urban and rural policing experiences? Are there greater levels of this now popular ‘us & them’ mentality that sadly exists between the police and public in our society?

Thankfully I still believe that, for the time being at least, much of that belief is confined to more urban areas, but for how long? Finally, does the website do anything to help dispel that sad belief, be it a factual one or simply a perception? Is it reducing or compounding it?

Like all websites containing this type of information; it is simply unacceptable to use all you read as fact. And certainly not as the basis to formulate your opinion about any other individual.

Although I, and hopefully many others don’t like it but, there will always be websites which further bias, bigotry and discrimination in people against other individuals – mostly due to the poor levels of education displayed in today’s society. This website, all be it in a small way, does tread that path somewhat. All said the website is yet another succinct illustration of the Karma in British policing!

The website is mostly humorous and does provide a high level of credence to that age-old adage – You Reap What You Sow! It’s not always a good idea to be too serious in life, having the ability to laugh at yourself as well as others is always good skill to possess.

Although the recruiting ‘advert’ for PCSOs – Get Paid for Being a TWAT – Become a PCSO – may perhaps be a little harsh? 🙂 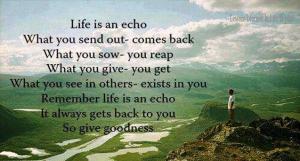 Note: As you sow so shall you reap – Meaning: Your deeds, good or bad, will repay you in kind. Origin: The Bible, Galatians VI (King James Version); “Whatsoever a man soweth, that shall he also reap” (biblegateway.com).

One thought on “Bodgit And Scarper #Police PLC”