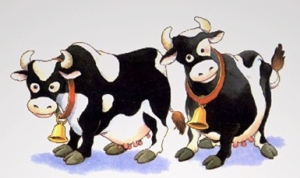 The now familiar “You have two cows” jokes were originally a parody of the typical educational examples used in introductory-level economics course material.

A typical example is: “You have two cows; you want chickens; you set out to find another farmer who has chickens and wants a cow”.

The above example was used to show the limitations of the barter system, leading to the eventual introduction of currency and money. Some later examples of the jocular parody include…

I wonder how the ‘two cows’ illustration should be applied to the British Public Sector and in particular, the management of our Policing and other emergency services? Any ideas?