I often wonder where all my philosophical skepticism and cynicism comes from. Perhaps it’s a trait developed from observing life, society, and the individuals living within that society for so long now.

As is often the case, this blog post was originally intended to cover a different but connected subject. It’s origins came from me being pointed in the direction of a spoof review of our local night club. From the original idea of poking fun at a local ‘phenomenon’ came the greater issue of my life observations and philosophy. But firstly let me mention the catalyst.

Note: The following review isn’t for the faint-hearted, those who lack any ability to see the funny side of almost anything should avoid clicking the link. It is definitely not for those living a life of adherence to strict political correctness. Now I’ve said all that, you just know there will be those who feel duty bound to get both offended and upset, probably to the extent of long-lasting psychological trauma… Don’t try to sue me – I didn’t write the bloody thing and you were warned.

At www.uncyclopedia.wikia.com you can find a satirical review of Club Amadeus, along with a plentiful supply of (mis)information about the town of Northallerton.

Club Amadeus: The Ooh-wop ooh-wop is the customary chant on the dance floor. A psychologist’s translation of this behaviour: “I have no GCSEs and a bucket fanny, I’m single and plan to remain that way through the use of loud high-pitched noises.” (uncyclopedia.wikia.com)

The saddest part about the review is not the fact it pokes fun at some unfortunate aspects of our society, or the individuals within it. Nor is it the use of selatious or vulgar words to describe incidents, situations or individuals, ones that many could well be offended or upset about. No the unfortunate FACT about the page is; as with most examples of effective satire, a good proportion of what is published is wickedly close to the actual reality. Even if it is portrayed with tongue-in-cheek satirical poetic licence.

The review does however serve to illustrate a particular philosophy and one which I often subscribe to. It contains a liberal amount of cynicism and satire, traits that are an important part of life’s coping mechanisms. After all, if you couldn’t laugh at the stupidity of some things, you would cry – take modern politics as a case in point. According to my peers I often display these life-skills, a factor I’m mostly thankful for! 🙂

After thirty years as a police officer, and a lifetime in customer service type rolls, it shouldn’t really be that surprising that I developed in this way. The consequence is that I often have a requirement to question the information I consume. I rarely take things at face-value and usually need them to be well supported by reasonable levels of evidence. 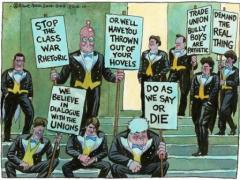 Cynicism is an attitude or state of mind that is characterized by a general distrust of others. And as a cynic, I also display a general lack of faith or hope in the human race. This personal trait is even more relevent when it comes to those individuals who possess desires and aspirations that are either, unrealistic or inappropriate for the greater wellbeing of our society as a whole.

Give me a good reason why such self-interested individuals shouldn’t be deserving of a good measure of ridicule or admonishment. The current stupidity of politics in Britain (and sadly many other nations) are a case in point.

Social Order News: The police say that water cannon will be deployed to the south-west of England, in order to quell any public protests over the government’s handling of the floods…(thepoke.co.uk)

David Cameron was once described by David Miliband as the “Basil Fawlty of British  Politics”  a person suffering from acute “Manuel Syndrome”  however; both men can be accused of thinking “if he shouts louder at the electorate they are going to like him or ­understand him more.” 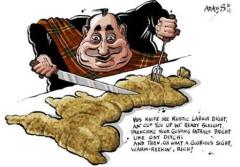 An article in The Telegraph once asked if, ‘Labour’s dog-whistle politics‘ would do anything for our nation when it came to Scottish Independence.

The simple answer is yes, it will play into the hands of Alex Salmond. A man who harbours plans based upon self-promotional desires and the self-importance of his political party. All be they born out of a perceived (but mistaken) belief that the Scottish public actually want independence.

We’ve had decades of all this petty point-scoring and self-promotional PR sparing between the political parties but many are now asking; will it ever change much for the benefit of our nation any more? It’s time that all this tit-for-tat showboating in politics came to an end – The well-being of our society is at stake!

Following the success of Copenhagen Zoo’s programme of killing and feeding unwanted giraffes to their Lions, London Zoo immediately announced a free shuttle bus from Westminster…(newsthump.com)

Finally, let’s look at this week in pictures then last by no means least, continuing with my life-long work for our society, here is a Public Service announcement on the Current Security Levels for your information: