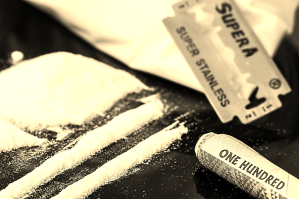 BREAKING NEWS: Alcohol and Cocaine are a dangerous combination… no shit?

According to recent news reports – “More cocaine is snorted in London than Barcelona, Amsterdam and Berlin combined” (Metro.co.uk) and – “The Two European Cocaine Capitals Are Both in the UK” (ViceUK).

If London really is the ‘party’ capital of the UK; how many of those who also drink alcohol are considering the profound dangers they face whilst ‘enjoying’ their substances of choice?

Cocaine and alcohol: here’s why they’re such a deadly combination – When anyone under the age of 40 is admitted to a hospital emergency department complaining of chest pain, the doctor is likely to ask if the patient has taken cocaine. Cocaine use is a risk factor for heart attacks, but that risk is magnified when combined with alcohol (read more)

Probably not many but, the direct individual health risks are only one smaller part of the associated issues like violent crime in London, and beyond.

London’s annual pure cocaine use now equates to more than eight tonnes, which has an estimated street value of more than £1 billion. Dr Leon Barron, a forensic scientist at King’s College London, said that cocaine was an ‘everyday drug’ in London, with the study finding ‘sustained cocaine usage across the week’ in the capital, with only ‘a slight rise at the weekend’. (Metro.co.uk)

As Vice reported in their Steady Rise of the Two-Pint Cocaine Habit article – “Drinking and drugging have always gone hand-in-hand” – where the ease of access to cocaine in the UK now means; the risks to individuals, along with all the associated increased violent crime and impacts to public health, are now probably of epidemic proportions.

Britain has a passion for cocaine. It’s in the water, on the toilet cistern and – according to new Home Office statistics – more likely to be sniffed up the nation’s nose than at any other point in the last two decades. (Vice UK)

Not everyone sees/accepts the inherent ‘dangers’ that are currently being shouted about in the media lately. Perhaps all the noise is simply the usual emotive media tripe?

There’s been a stream of these ‘deadly coke and booze mix’ articles. But the dangers of mixing cocaine and alcohol are being overblown

Cocaine and alcohol: here's why they're such a deadly combination https://t.co/7kHWtTSIuL

But as ever, this particular ‘news’ isn’t actually a new phenomenon, despite what our media headlines tell us (this week) and, as Drugwise recently asked in their article, How much crime is drug related? Actually and increasingly so… probably quite a lot but remember;

The fact that acquisitive crime is focused on poorer, inner city areas makes for a lot of stress and difficulty for people who live there. However, understanding the relationship between drugs and crime is about keeping matters in perspective, rather than falling for media scare stories. (drugwise.org.uk)

The ‘acquisitive crime’ aspect attached to drugs use, arguably caused by prohibition in our [political] War on Drugs, is only the smaller front-end issue in this social public-health problem. The Organised Crime Groups (OCGs) behind the ‘illegal’ drugs trade are the underlying issue that needs to be addressed.

According to the National Crime Agency (NCA), which is the lead law enforcement agency for tackling this threat, there are more than 4,500 serious and organised crime groups in the UK and this type of crime costs the economy an estimated £37 billion a year (Gov.uk)

In 2018 (and probably many times before) the media reported that politicians were talking about the “UK becoming ‘cocaine capital’ of Europe” but, all the previous warnings not without standing, what have the Government actually done to address (m)any of the issues? Despite (belatedly) recognising the OCG impacts and (recently) implementing a ‘new review‘ the politicians keep talking… trotting out tired virtue-signalling political rhetoric and diatribe.

It is true that 100 years of words got to us to where we are today and we were lucky to have them. Brilliant people pushing back against dangerous, dehumanising laws and attitudes that ran from the UN all the way down to cops on the beat, feeding on the fears of parents and families and community leaders across the planet. But the time for words is over. The evidence is in. Now it is time for action. (Leap UK)

Responding to the ‘news’ in 2018, the Labour MP David Lammy warned that there would be “more killings in London if the authorities did not take urgent action” about cocaine consumption. Sadly, it appears his premonition actually came to fruition (see here) but true to form, at that time he engineered his view of the problem into little more than a race issue. Banging his personal political drum – ministers must ask themselves “do black lives matter?” (BBC News) – is, in many ways, actually missing many of the real problems.

And Sajid Javid, the (Conservative) Home Secretary of the time, was also happy to (politically) miss the point by selecting the ‘Middle Class’ as the root and convenient scapegoat for all our ineffective drugs policy. Blaming Middle-class Coke Users for London’s Murders is PR Nonsense. Again, this tired “getting tough on people who use drugs” rhetoric is trite, ineffective, and counterproductive.

So let’s apply appropriate ’blame’ then. The policies that created this can be amended so that farmers have a sustainable income, whilst consumers have responsible and ethical products. Reform, regulate. https://t.co/kgWMOMbF62

But even The Guardian, that bastion of left-leaning liberalism, suggests that; ending ‘prohibition’ is not the panacea for all the systemic failings in the so-called War On Drugs..

It is easier to find fault with prohibition than to design a perfect system, but there is clear evidence that the current methods are failing (The Guardian)

Given all the “do as I say, not as I do” revelations from Government Ministers over recent years I have to wonder; how many politicians are still enjoying their Vodka & ‘Coke’ whilst chatting about their party-political response to the latest drugs policy?