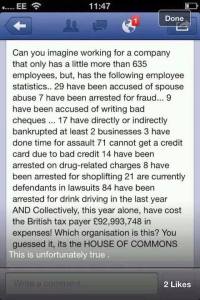 Recently this image was posted on Facebook locally. Was it something done by a person with a genuine concern about the issue being raised, or someone simply trying to ‘evidence’ a personal opinion? Or, could it possibly have been done with mischievous intent?

Irrespective of its validity at this stage, it made several people react quickly and angrily…one of those infamous light blue touch-paper and stand well back moments! 🙂

Some people just found it amusing, some found it a little disturbing but many, at the very least, were a tad annoyed about the ‘facts’ covered in the text. Could that have been the intention of the person who posted it? Or, as is so often the case today, was that person simply oblivious and/or unconcerned about the reactions it might generate?

In our electronic age the speed at which information circulates is phenomenal, be it factual or fictional. Since the advent and proliferation of social media, that information (but not always its true source) can also be placed in front of so many more people. But with those advantages also come some pretty important negative impacts.

This particular snippet (above) is actually quiet old, it has been doing the rounds for some time now. It has been suggested that the information was taken from something similar which originally appeared in the USA. It was subsequently manipulated to make it ‘fit’ issues prevalent within the UK. For the purpose of this post, it still doesn’t matter whether it be factual or fictitious, I’m just using it to illustrate a point.

In case you’re interested and/or haven’t seen it before (or can’t read the image text) it is reproduced below:-

The earliest mention of it that I found via a Google search was back in May 2011. One commentator to that posting, found in a Daily Mail news forum (see here), whilst discussing its factual status pointed out – “it does us no harm to remember who we’re being governed by” and I would mostly agree. As I’ve suggested before, anything that actually causes us to stop and pause for thought about important things is useful.

Many in our society have a tendency not to think that much at all really. On the odd occasions when they do, they blindly swallow up all manner of spoon fed crap. Information data and statistics obtained from dubious sources like social media, emotive tabloid press headlines and politically motivated outlets. After gorging on a diet of uncorroborated shite they suddenly become ‘experts’ and spout opinion with self-appointed authoritative voices.

Yes I know, I’m seen by many as an opinionated and vociferous individual but I like to think I’m different from those I talk of above. I was always taught by my father (and my education) to be sure of my facts, or at least as sure as I can be before offering my opinion to others.

It’s probably not too much of a problem when you do it in a small or closed group. Try making the same mistake via the internet (accidentally or otherwise) and you shouldn’t be too surprised if you upset a lot of people. This is one of the reasons why we’re starting to see a more robust application of the laws relating to intimidation, harassment and incitement via Social Media.

So note well; think, research and think again before you start bashing away at your keyboard and posting on your favourite ‘t’ interweb forum or social media site. Because, when you get your collar felt for abusing your right to free speach trust me… a simple reply to caution of “#hashtag just saying” really ain’t likely to cut much mustard!