This week the Police Federation of England and Wales (PFEW) held its annual conference (see here). Probably more than in most years before, the outcome(s) from conference would, hopefully for many, deliver a massive sea change in the structure and ethos of the organisation.

Apart from the routine business, the high or low point of the conference, depending upon your personal views, was that speech made by the current Home Secretary, the Rt Hon Theresa May MP.

May’s speech was (arguably) the most controversial aspect of conference. Hopefully there will be at least some who can admit that some of what she said needed saying, even when they (and I) aren’t particularly happy with the tone she used to deliver it. That said, it was suggested via Twitter by the often acidic author of the Inspector Gadget Blog that; anyone who was even mildly supportive of the content in her speech could well be suffering from Stockholm Syndrome.

Note: I said “current Home Secretary” because I, and many others no doubt, would like to think she won’t be in post for that much longer?

Many within policing and the Federation itself (see ‘official’ response) have commented on the speech and I, as a retired Federation Rep and now an outsider, also feel the need to add my two-penneth to the mix, for what it’s worth. Let me start by saying; whether or not Mrs May, the Home Office and our Government are actually fulfilling their stated policy – “Helping the police fight crime more effectively” – is wholly debatable.

Mrs May started by saying “The police must change and so must the Federation” but, as she urged reform, she was simply stating the obvious. It was reiterating a fact that PFEW were already fully aware of (see here) and one which they had already acted upon, prior to conference (see here).

Those who would argue that officers are simply against change are wrong as 84 per cent agree reform is needed but 92.5 per cent want that change to be independent of politics…(POLICE – View from the Sidelines – Clive Chamberlain)

Some say that Mrs May was using her speech to hammer home her personal leadership desires for the somewhat ailing Conservative Party. Indeed, bookies are offering favourable odds on her eventual succession to David Cameron’s lofty position in government.  It has to be said, her speech left the Federation feeling as if they were being “cornered – like a 1980s trade union” either that or, nursing a smarting ear, like a child suitably scolded and reprimanded by a parent or teacher.

You may find, as I did, some interesting reading in the RSA Blog – The inside story of a high stakes day at the Police Federation conference (see here).

As conference concluded a new leader emerged for our “embattled” Federation. Still smarting from the “beasting” delivered by Mrs May, a new Chairman was elected. The selection committee may have been evenly split between the two prospective candidates however; the coin tossing episode actually did little to endear the organisation to its membership, or the media. But was this really “a metaphor for division” or further evidence of “arcane practices” in the organisation?

2 good people embrace reform & go for the same job. Just because the people voting for them are split 50/50 it does not mean you’re divided…(A&S Sgts)

Again the media were quick to jump in with their ridicule and adverse comment about the Federation and policing as a whole. Sean O’Neill, Crime Editor of The Times was one of the first to offer what was, in my opinion, little more than a mischievous attempt to further the factual (or perceived) division within the ranks of the Federation. It certainly wasn’t helpful for anyone trying to move things forward, least of all the Federation, and I told him so. 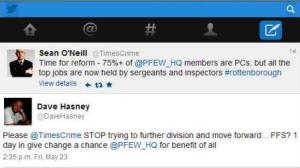 His type of comment and/or the constant reporting of ‘bad news’ stories, factual or implied, is also the root cause of so much public mistrust, youthful dislike and increasing lack of public confidence in the police. It is also a causation factor for the massive political manipulation of British policing over more recent years.

In many respects the media and our politicians have either created, or at the very least exacerbated many of the problems we see in our policing system today. Problems that were either, minor and easily repairable or even almost nonexistent in the first place. You can’t keep daubing any organisation with a shitty paintbrush and expect that non of it will stick!

I have to say that some of the post speech comments I have seen, particularly from the PFEW  ‘insiders’ have been a little insular and made with an element of what can only be described as self-interest. Like much of the current angst attached to Scottish independence, surly the debate should be around the greater good of the majority, not the individual or smaller group desires and aspirations of a minority?

“@Boscorelli55: @CBBSec_Norfolk IMHO The Met need to ask themselves if they’re part of “UK policing plc” or “The Met Ltd”” #pfewconf14 (via Twitter)

One of my Twitter followers said; “I fear MPS culture has influenced too many others at all levels for too long.” He is right an, it is my belief that to a certain extent, the arrogance of the MPS has been a nail in the coffin of public support for policing for some time. Add the often arrogance of some views from The Constables, and in particular the Metropolitan Police branch board (being the larger groupings), has often been and sometimes still is a case in point.

It’s one of the reasons why I prefer to gauge overall opinion and response from ‘outsiders’ after all, aren’t they more truly reflective of the opinions and visions of the public…the ones that the police serve?

NORTHWESTDOC: As a Doctor who works with the Police I was extremely interested in what Mrs May had to say. It was cataclysmic. It was of course delivered with an eye to political advantage. But most of all it delivered a message that Policing has a major image problem and things need to change. I can’t disagree with that message. Without going into details I know some of the issues raised by the long list she reeled off are pervasive and need challenge. But I know many Police Officers will also be happy to see those changes…(read more)

Another balanced view of ‘May Day’ was quickly provided after Conference by Jack of Kent, who often takes “a critical and liberal look at law, policy, and other things” (see here).

Thankfully there were some ‘insiders’ who were also capable of taking a step back. Ones who paused from the anger that arose from being humiliated and ‘blamed’ for all the ills in policing by Mrs May. Whether or not you were involved in the likes of Hillsborough or Stephen Lawrence et al was unimportant. May left many police officers feeling as if they were receiving a personal attack and, were personally responsible for every single past failure in the history of British policing.

The fact you were not involved in any of those ‘failures’ which Mrs May chose to example was mostly immaterial, at least to her and the point she was trying to make. It was ‘your fault’ even if you hadn’t been born at the time. But, in some ways, wasn’t she partly correct? It was a factor admirably explained, far better than I could, in the ‘No More Chances‘ blog post by Nathan Constable.

The Conference was extremely thought-provoking, for me at least and somewhat surprisingly like several others, I also found myself enjoying agreement with Shami Chakrabarti of Liberty fame,. Her overarching theme was the importance of ‘the office of constable’ keeping out of politics and – as with the judiciary – serving the rule of law. She also repeated Liberty’s “profound concerns about elected Police and Crime Commissioners” and pointed out “how dangerous they are to police independence.” Can’t disagree there!

After the words of Mrs May, Shami Chakrabarti and others this week there is one thing of which I’m certain…There was certainly plenty to think about. Whether or not it was the required catalyst for real change in the Federation (and/or policing as a whole) remains to be seen, I hope it was. It may well be the seminal point from which great things grow for the future of British policing, I just hope I don’t have to hold my breath for too long.

Finally, I have to agree with an ex-colleague of mine (and former MPS officer) commenting on the aftermath of Conference… “Think Tankers” IS in fact Cockney Rhyming Slang!