In simple terms, it depends upon the particular knife, the mental state (mens rea) of the person who is using it and ultimately, the actual use he/she choses to put that knife to and where – but read on…

I’ve recently purchased a new knife for general outdoor use and as a tool for my rekindled interest in Bushcraft (a tonic for modern life). I thought I’d share a few thoughts about the actual knife, include some information about UK knife laws (see below) and take a look at the increasing concerns about UK Knife Crime (also see below).

Since my early years with the Cubs and Scouts and later in life with the Army Cadet Force (ACF) and Territorial Army (TA), I have nearly always carried some form of pocket knife.

As a chef in my early working life, knives were the tools of my trade. As a police officer I carried a small pocket knife, or latterly a Leatherman™ multi-tool, and used it on an almost daily basis for all manner of routine and emergency tasks in my daily work. Now I’m retired and work as a bartender, I usually have a sommelier knife or waiter’s friend about my person.

From a personal perspective and because I’ve never been a violent thug or a criminal, a knife is and always has been a tool. As an avid angler and outdoor type of person I often need a blade or cutting edge of some sort.

The knife I purchased (via amazon.co.uk

The company is the largest producer of Sport Knives, Tactical Knives and Collectors knives in Europe. Renowned all over the world, their “unmatched variety of blade and handle materials” I have to agree, is fairly impressive.

According to the company website; “This full size folder is suited for a variety of cutting chores. Whether you are a backpacker, a craftsman, or you just need a reliable knife in your pocket for everyday use, this will do the job.”

The knife is made of coated steel and the drop point blade has a big belly secured by a sturdy liner lock. Steel bolsters and black Micarta scales provide a secure and comfortable grip. The knife includes a pocket clip for easy carry. Blade length: 3 1/8″. Overall length: 7 5/8″. Weight: 5.6 oz.

I like the feel and appearance of the knife and I’m looking forward to using it ‘in the field’ for various tasks however; due to the locking blade and its length, I won’t be able to carry it legally in a public place. In addition and despite not having any issues with its quality or reliability (as yet), i’m a little worried about how genuine the knife is. As I said before, it was an internet purchase and I have some minor concerns as to whether or not it’s actually a real Böker product. One that was manufactured in Germany and underwent their quality control processes?

Since starting to make high quality knives in 1869, the Böker trademark has earned a strong position in the world knife market. Unfortunately in today’s ‘connected’ world of money-making opportunity, with brand popularity also comes counterfeits. Almost impossible to tell apart from the original, ‘Boker’ knives mainly produced in Asia from inferior materials, are flooding the marketplace and being sold for unbelievably low prices on the internet.

Irrespective of any merchantability… Caveat emptor! 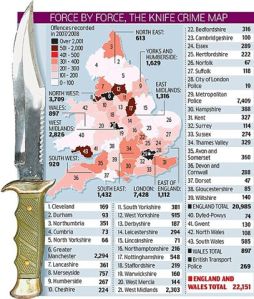 A significant problem faced by knife owners today is that they (knives) are mostly seen by society, in the same light as guns i.e. they are weapons.

Back in 2008 it was reported that “Knife violence in Britain is far worse than official statistics suggest, with almost 14000 people taken to hospital for injuries caused by knives.” (independant.co.uk)

Conversely and according to the Crime Survey for England and Wales in 2011/12 “a knife was used in 6% of all incidents of violence experienced by adults” (source parliament.uk). These numbers are broadly similar to the previous year’s proportion, despite the much lauded fall in overall crime figures over recent years.

In July 2013 it was reported that “Up to 1,000 people a month are victims of knife crime in London” (London Evening Standard). “Knives are used in 4 out of 10 murders of young people in the UK. Nearly a third of children in the UK have been affected by gun and knife crime.” (thebigquestion.co.uk)

There are undoubtedly some worrying statistics and trends in UK Knife Crime however it should also be remembered; public perception of crime rarely matches that of actual crime. You can examine the latest government reports on crime statistics in the ONS Crime in England and Wales, Year Ending March 2013 report.

One ‘official’ government response to all this said; “The issue of knife related crime continues to be high on the political agenda due to a series of tragic knife related incidents.” (gov.uk)

It should be noted, there is no ‘official’ Home Office definition of ‘Knife Crime’ and ‘Knife-enabled Crime’ includes a variety of offences involving a bladed weapon or sharp instrument, this includes a bottle or glass (broken or unbroken).

The laws about buying and carrying a knife depend on the type of knife, your age and your circumstances (see gov.uk). Basically, it is “illegal to carry or use any knife in a ‘public place’ without a good reason.”

Like many other UK laws, definitions such as knife, prohibited, public place and good reason are all (to a certain extent), open to interpretation and/or legal challenge.

Some types of knives are specifically prohibited but if you’re charged with carrying any knife illegally, a court of law will decide if you’ve got a ‘good reason’ for carrying it. When the maximum penalty for an adult ‘illegally’ carrying a knife is 4 years in prison and a fine of £5,000, the individual should way up the risks and consequences of falling foul of those laws.

The Bushcraft Store – Knife Law Advice: The law is quite clear but can be a little vague in places, whether this is intentional I am un-sure but it is likely that it is to allow a sensible Policeman to use his discretion as there are no “Black and White” cases when it comes to the law…(read more)

In the aftermath of the Dunblane school massacre, along with the 1987 Hungerford massacre, the 1989 Monkseaton shootings and the 2010 Cumbria shootings, it was inevitable that UK Gun Control would be tightened up. It is argued that our laws were changed mostly because of the emotive media coverage of these events. Ones that were in real terms, isolated and unusual incidents.

Could a similar, mostly ‘knee-jerk’ reaction, impact upon future legislation relating to the possession of knives? Personally I don’t think so, at least not in the short-term. That said, as legislation is often drawn up because of statistical data and/or public opinion perhaps we should worry? As with any crime statistics, the data relating to knife crime is also open to police gaming, political manipulation and subject to the mischief of our media machine.

To me one question always remains with this type of situation; is it right to further legislate against the majority to manage and control the (criminal or mentally unstable) minority? Or as is my view, perhaps we should do more to ensure that existing legislation is more robustly applied?

It’s a sad indictment any society when peaceful citizens are forced to endure laws imposed to control the activities of those who aren’t – C’est la vie!